Time a time again, someone decides to act out of hate against people who have nothing to do with what is a boiling rage against them.

Yet, time and time again, we see that one act followed by hundreds of acts based on love.

All too often, when something like this shatters the "normal" life experience, we ask "Where was God" but if you look, you can see Him everywhere.

You see him when someone else puts their own life on the line, sacrificing themselves to save another. You see it when, with every reason to fear another attack, people show up in case they can help someone else.

When you go to the link, there is a video and a young woman, crying, says "This is not who we are. This will not define us." And it won't because in return for the one action of a person filled with hate, love responded. 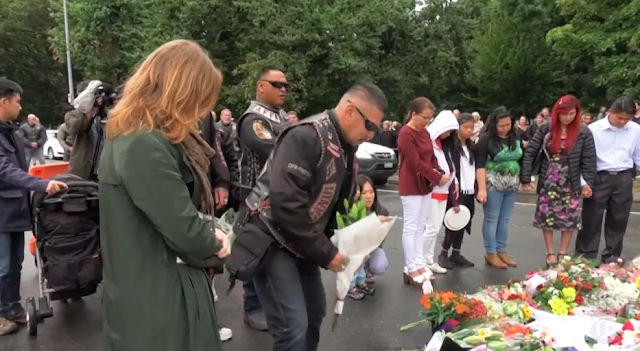 CHRISTCHURCH, New Zealand — Abdul Aziz was praying with his four sons in the Linwood Mosque when he heard the gunshots. Rather than run from the noise, he ran toward it, grabbed the first thing he could find — a credit card machine — and flung it at the attacker.

The man dropped a shotgun, and Mr. Aziz picked it up. “I pulled the trigger, and there was nothing,” he recalled. The gunman ran to his car, where he had other weapons, and Mr. Aziz followed, throwing the shotgun at the vehicle and shattering a window.

Mr. Aziz’s actions, which he and others described in interviews, may have prompted the gunman to speed away rather than return to kill more people. Minutes later, two police officers from another town who were in the area rammed the suspect’s car into a curb and took him into custody, ending the worst mass murder in New Zealand’s modern history.


But interviews with dozens of survivors, and an analysis of a video recorded by the attacker as well as one made of his arrest by a bystander, suggest that the violence ended after a near miss by the police at the first mosque — and acts of courage during and after the attack on the second.

If not for the two police officers, who have not been publicly identified, and Mr. Aziz, 48, a ponytailed furniture shop owner who fled Afghanistan a quarter-century ago, the slaughter might have continued. The suspect had two other guns in his car, the police said, as well as two homemade explosives
read more here

Posted by Kathie Costos at 8:03 PM