Each veteran receives round-the-clock care and regular visits from licensed medical practitioners, including occupational therapists, doctors, and psychologists. The foster caregivers receive a stipend of $2,400 a month to take care of each veteran. 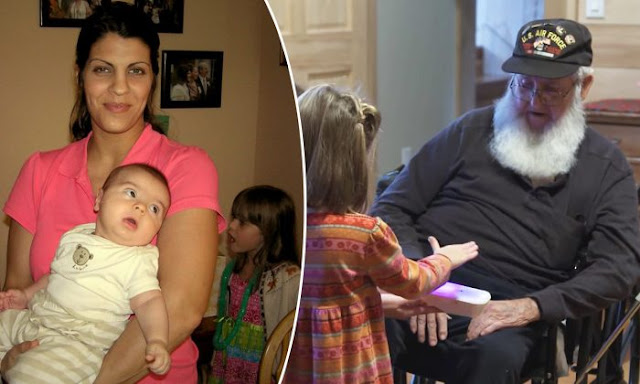 It takes a lot of patience to raise a family, and more so for a larger one. But for Sarah and Troy Rufing, who have six young kids, taking on three more people wasn’t a big deal. Except that the three people they fostered weren’t kids but elderly veterans with special needs.

The Rufings are among the 700 participants of The United States Department of Veteran Affairs Medical Foster Home Program, which “provides housing and care for more than 1,000 veterans in 42 states and Puerto Rico, serving as an alternative to nursing home care for those who cannot live safely on their own,” according to Military.com.

At their home in Greenville, Indiana, the Rufings’ family of eight members has expanded to 11 with the addition of Army Sgt. William Sutton, 53, Sgt. Charles Hughes, 87, and Army Cpl. Robert Schellenberg, 89. The three war heroes live in a three-bedroom wing attached to the main home.
read more here
Posted by Kathie Costos at 5:38 PM