A high school senior who plans to become a Marine after graduation was among the students who tackled a gunman in a Colorado school on Tuesday.

Brendan Bialy attends the STEM School Highlands Ranch, which is not far from the site of the Columbine High School shooting 20 years ago. 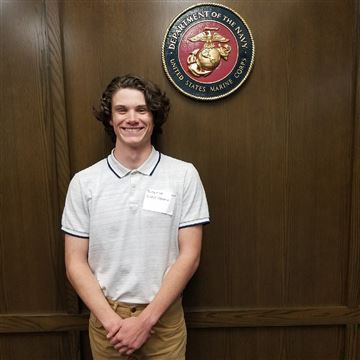 Brendan Bialy, who is enrolled in the Marine Corps Delayed Entry Program, helped subdue a shooter at the STEM School in Colorado.

Bialy's father, Brad, confirmed to NBC News that the teenager and other classmates tackled and disarmed one of the two shooters.
read more here

UPDATE: And the hero who did not survive

"This wasn't your average kid. He was extraordinary": Dad of school shooting hero remembers his son
CBS News
MAY 9, 2019

John and Maria Castillo are still trying to process the fact that their son, Kendrick, is gone.

"I'm sad, I'm mad. I have all these emotions. I feel like my life is blank as of yesterday," said John, speaking with reporters from the family home in Denver. CBS Denver was there.
read more of his story here
Posted by Kathie Costos at 4:59 PM