Oklahoma veteran with PTSD sent to death by suicide?

This is one of those stories that I missed. I found it today searching for something else. It is a story that needs to be shared because it is yet one more, among a long list, of things we get oh, so wrong.


Krysten Gonzalez, front, prepares to paint a hallway at the City Rescue Mission in 2014. At the time, Gonzalez was a part of a recovery program at the rescue mission. Gonzalez died Tuesday after being found unresponsive at the Oklahoma County jail. 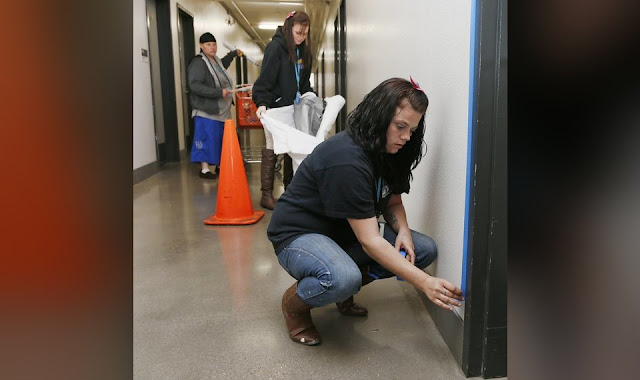 Editor's note: If you or anyone you know is experiencing suicidal thoughts, call the National Suicide Prevention Lifeline at 1-800-273-8255. Find more information here.


For nearly three months before she died, Krysten Mischelle Gonzalez sat in an Oklahoma County jail cell while public defenders searched for an inpatient mental health treatment facility that would agree to accept her, the county's chief public defender says.

Gonzalez, 29, was found unresponsive in her cell about 4:30 p.m. Tuesday. Jail staff performed lifesaving measures before taking her to OU Medical Center, where she was pronounced dead shortly after 5 p.m. The state medical examiner's office has not determined a cause of death, but jail officials say Gonzalez hanged herself.

Gonzalez had been jailed since Oct. 11 on a warrant for failure to appear. The case stems from a June 2017 incident in which an officer responding to a shoplifting call found a baggie containing 0.6 grams of meth in Gonzalez's purse.

A U.S. Army veteran, Gonzalez stated in court papers that she had been treated in the past for post-traumatic stress disorder, depression and anxiety. In November 2017, her Oklahoma County case was transferred to mental health court. As a part of that transfer, Gonzalez agreed to make regular appearances in mental health court. If she violated the terms of the agreement, Gonzalez would be subject to an automatic 10-year prison sentence.
read more here
Posted by Kathie Costos at 5:12 PM