While POTUS takes credit for the Veterans Choice Act, he ended up taking credit for one of the biggest mistakes John McCain made. Yes, it was something that Senator McCain pushed for a long time. He managed to pull off pushing to get veterans into the private hell all of the other elected members said was so bad for citizens back when he was running for the presidency.

McCain sells out our vets
The Nation


“We should give them freedom to choose to carry their VA dollars to a provider that gives them the timely care at high quality and in the best location,” McCain has said. AFGE sees it as a backdoor attempt to undermine, or even destroy, the VA. According to Phillip Longman, a senior fellow at the New America Foundation and an expert on the VA, such ideas aren’t always inappropriate (disclosure: in 2006 I worked at NAF, where I provided research assistance to Longman and others). Private services, he says, can in some cases be essential to veterans in underserved communities. “But his idea shows just how uninformed [McCain] is about veterans and the VA. Veterans who are already in the system don’t want to get out,” Longman says. “Every veteran who moves from the VA system into the private system will find it more dangerous and more costly.” And there are additional concerns. AFGE points to incidents like the ones in Hayward and Rice Lake, Wisconsin. Last summer veterans facilities in those cities outsourced the operation of their clinics to a private firm, Corporate Health and Wellness. Within a few months the company, citing major financial losses, jumped ship, leaving veterans in search of care locked out for weeks.

Then followed thru with this.


Veterans' Access to Care through Choice, Accountability, and Transparency Act of 2014

Most advocates make the point that our veterans pre-paid for their care when they became wounded and disabled serving the nation. Treating them... subjecting them to the same system the rest of us deal with is heartless neglect of those who made us a promise, delivered on it, and then they were betrayed when it came time to care for them.

So now you know how far back this goes and how sickening it is that members of Congress just said, veterans did not deserve their own care, this is what POTUS claimed...even though as you just read, John McCain started it all and Obama signed the first bill to do it. 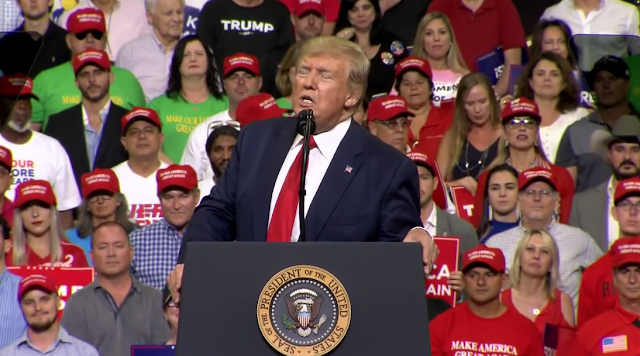 The Hill reported this


President Trump at his 2020 campaign kickoff rally on Tuesday took credit for passing a veteran's health care bill that was signed into law by former President Obama. "We passed VA Choice," he said, referring to a bill that allows veterans to seek health options outside the Veterans Affairs-run system. "You go out now, you get a doctor, you fix yourself up, the doctor sends us the bill, we pay for it. And you know what? It doesn't matter because the life and the veteran is more important, but we also happen to save a lot of money doing that.""They've been trying to get that passed also for about 44 years," he added.

But he had the same speech last year too.

President Donald Trump has been barnstorming for Republicans in the midterms. On Oct. 1 he landed in Johnson City, Tenn., to help U.S. Senate candidate Marsha Blackburn, covering familiar ground about the improving economy.
He touted securing $716 billion for the military, and he gave Republicans credit for giving veterans a new health care option.
read more here

Posted by Kathie Costos at 7:44 PM