Eight year old girl knew who Bessie Coleman was. Do you?


For all of Noa’s hard work and willingness to report on Coleman, the National Aviation Hall of Fame Museum decided to fly Noa and her family to the museum in Dayton, Ohio. There she got the privilege to meet a relative of her hero.

Bessie Coleman’s great-niece, Gigi Coleman, greeted her when she arrived and awarded Noa a medallion for her outstanding project.


When 8-year-old Noa Lewis was assigned a school project on Amelia Earhart, she flipped the script and asked instead to report on Bessie Coleman, who was the first female African American and Native American pilot. 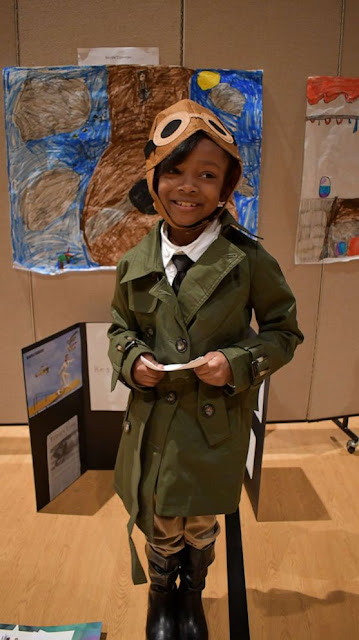 
Noa and her second-grade class were given the assignment to create and be a part of a “wax museum,” with each student embodying their assigned historical figure. Noa had originally been assigned Amelia Earhart, the first female aviator to fly solo across the Atlantic Ocean.

Lewis was picking up her daughter from school when Noa told her mom about the project and about how she wanted to report on a person who was once featured in her favorite Disney show, “Doc McStuffins.” Lewis was naming names, trying to help her daughter remember who it was.

It turns out it was Bessie Coleman, or “Queen Bessie,” as Noa refers to her. Coleman was the first female African American and Native American to hold a pilot’s license.

Lewis saw how passionate Noa was about Bessie Coleman, so as Noa’s teacher was exiting the school, she asked her if her daughter could instead report on Coleman.
read it here

Posted by Kathie Costos at 4:24 PM