Six year old girl wants to know why plastic soldiers are not women too...and so do a lot of other people

update Girl’s message for equality received in a big way: Green Army women figurines are on the way


BMC Toys, one of three companies to receive letters from young Vivian Lord — and the only to respond — has begun producing women figurines to be included in the iconic toy set that dates back to the 1930s.

Missing in action: Classic green Army men still have no women figurines, and this 6-year-old is not having it

Young Vivian Lord of Arkansas recently acquired a set of the instantly recognizable plastic green Army men figurines, iconic toys the 6-year-old had been pining after for weeks. 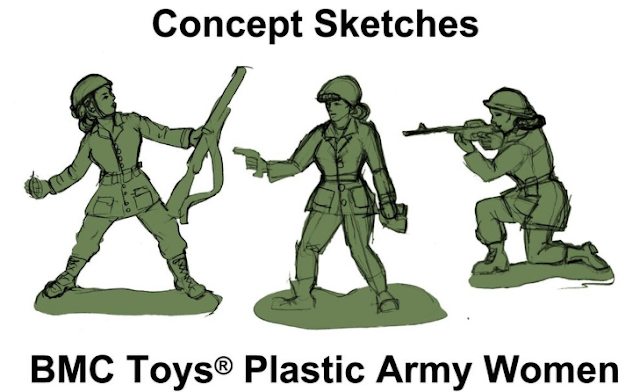 
Excitedly, the little girl from Little Rock sifted through the combat-ready green men, each figure contorted into one of an array of well-known fighting positions, but she couldn’t find what she was looking for.

Unsatisfied, Vivian decided to take it up directly with various toy makers, penning letters to three different companies in an effort to add a little enlightenment to some antiquated business practices.

After opening her letter with a quick statement about her budding soccer career, Vivian gets right to the point, calling to the attention of toy makers the scarcity of women figurines, as well as the poorly received pink — still all men — versions some companies produced.
read it here
Posted by Kathie Costos at 4:31 PM