“I am deeply worried about when the last Vietnam veteran dies — the last man to see a fellow soldier alive, a man like me who gave him an order to go up that trail — who will be left to carry on the mission?” 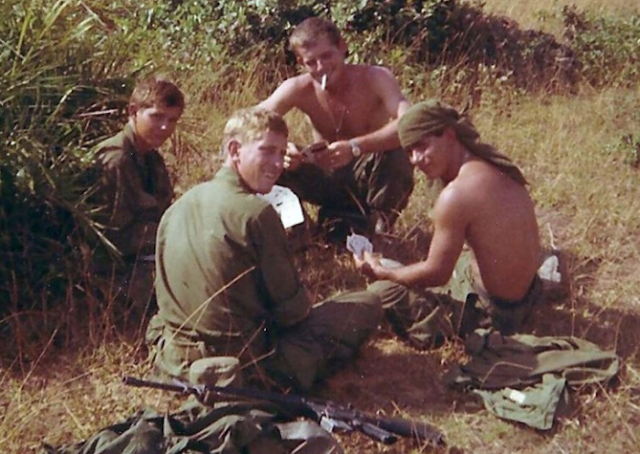 Spc. Clifford Van Artsdalen, left, plays cards with his fellow platoon members on May 5, 1968, as they await a helicopter shuttle to Hill 352 on Nui Hoac Ridge, South Vietnam. GARY SANNER

Pushing through dense foliage toward the site of the bygone ambush, Michael McDonald-Low felt like he was floating through time.

He had longed for this day, planning thoroughly for the time he would return to this hillside in Vietnam’s Que Son Valley, where many of his infantry company were wounded or killed by a hail of North Vietnamese gunfire on May 11, 1968. The body of one of those soldiers in the platoon he commanded, Spc. Clifford Van Artsdalen, had never been recovered.

That fateful trek was etched like a gravestone inscription in his mind as he retraced his steps during this mission on March 9, 2012, to pinpoint the exact location of Van Artsdalen’s death so that his remains could be found and returned home.

He pressed on to find the split in the trail where he had sent Van Artsdalen and two other soldiers ahead to secure the route.

Soon after finding it, McDonald-Low was joined by the other 11 members of the mission team from the Joint POW/MIA Accounting Agency, the U.S. Defense Department body tasked at that time with finding America’s lost warfighters.

McDonald-Low was confident that this was the exact location where Van Artsdalen was killed, he told Stars and Stripes during a series of interviews about his search. With the location pinpointed — the government for years had been working with an erroneous place and date of his death — the way was finally clear to find and repatriate the soldier’s remains.

Seven years later, nothing has changed. McDonald-Low’s quest to bring him home is no further along than it was then.

And there is little time left.
read it here
Posted by Kathie Costos at 4:41 PM