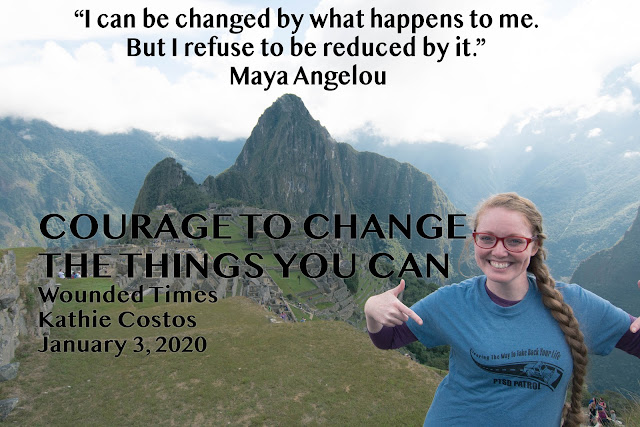 Courage to change the things you can

Before you wonder, that is not me in the picture. Erica is my favorite boss from Fidelity National Title, when I lived in Florida. She surprised me by taking my T-shirt to Peru and climbed to the top of Machu Picchu wearing it. Erica is one of the most wonderful people you could ever meet. No matter what happens, she accepts what she cannot change while being determined to change what she can.

Most of us think that people like Erica are happy because they have been blessed with an easy life. We never seem to wonder why someone who is miserable became that way. We just assume they were born with a terrible attitude toward everyone else.

God, give me grace to accept with serenity
the things that cannot be changed,
Courage to change the things
which should be changed,
and the Wisdom to distinguish
the one from the other.

Living one day at a time,
Enjoying one moment at a time,
Accepting hardship as a pathway to peace,
Taking, as Jesus did,
This sinful world as it is,
Not as I would have it,
Trusting that You will make all things right,
If I surrender to Your will,
So that I may be reasonably happy in this life,
And supremely happy with You forever in the next.
Amen.
Reinhold Niebuhr

When you have PTSD, you have it because of something that happened to you. If what happened was because you decided to risk your life for the sake of someone else, the origins of that pull on your soul was based on having a courageous love.


If I have the gift of prophecy and can fathom all mysteries and all knowledge, and if I have a faith that can move mountains, but do not have love, I am nothing.
1 Corinthians 13:2

Isn't it time that someone reminded you of that choice you have? Isn't it time that you became less of a victim and more of a survivor? Why accept the limits others placed on themselves? Why not expect that you can live a happier life by breaking the boundaries you put

You control what came after "it" happened. You are the one who has the power to define your own future. The "it" that happened, or the many "its" lost because you lived, thus you became victorious. Why surrender to something that already lost?

Stop and think about what it took to walk away from "it" and notice the courage you had to move one foot in front of the other. Acknowledge what strength it took to utter the first words from a grateful voice instead of a bitter heart.

You can become "reasonably happy" in life, as long as you seek to change what you can about how you choose to live. That begins when you decide that you are done with being miserable and be willing to take the next step toward becoming hopeful.

Do not turn from God as if He is punishing you. He is the One who put it within you to cause you to be willing to serve others.


For I know the plans I have for you,” declares the Lord, “plans to prosper you and not to harm you, plans to give you hope and a future.
Jeremiah 29:11 New International Version (NIV)


If He put the strength and courage within you to do your job, He also put what you need to heal from what that doing that job did to you. Trust in what you knew to be true before "it" happened, because it is all there. There is nothing that is, or has to be, lesser about you, other than your suffering. Time to become victim-less and more survivor. You can get up there from here, if you have the courage to try to change how you define yourself.

Posted by Kathie Costos at 6:35 PM