Wounded by PTSD as Combat Medic, wounded again as firefighter, Ryan Mains fights so others can heal

Ryan Mains served others as an Army medic and a Woodstock firefighter. Now grappling with PTSD, he’s still trying to help.


That grim statistic is serving as motivation for Mains. On May 30, he plans to run 1 km for every firefighter and paramedic who dies by suicide in 2019. So far, that distance works out to just over 77 miles — more than twice as far as he’s ever gone. 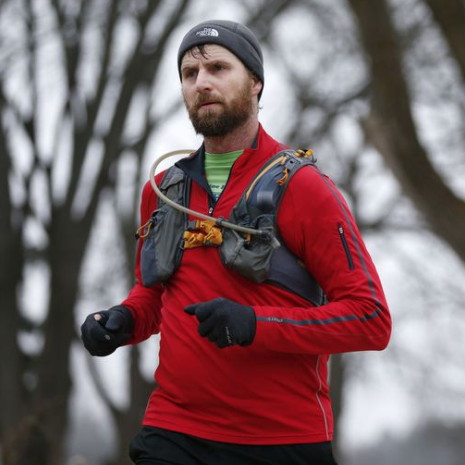 Ryan Mains, of Huntley, trains for an ultra-marathon in the woods of Veteran Acres Park on Dec. 11, 2019, in Crystal Lake. Mains will run more than 120 km next May, 1 km for each firefighter who committed suicide in 2019. Mains suffers from PTSD as as a result of his work as a combat medic in the armed forces as well as 14 years as a Woodstock paramedic/firefighter. (Stacey Wescott / Chicago Tribune)


The morning sky was the color of lead, the air was barely above freezing and the only sound was the crunch of dead leaves as Ryan Mains began a 10-mile run through Crystal Lake’s Veteran Acres Park.

He has come here for years to build his stamina on the park’s steep hills, preparing for races that stretch well beyond a marathon. But he also treasures the stillness. When he runs, observed by a few placid deer and the occasional owl, the memories that trouble him vanish like mist.

They always come back, though. He can never run far enough to escape them completely.

Mains, 39, is a veteran of the Iraq war and a longtime Woodstock firefighter and paramedic who has been diagnosed with a severe case of post-traumatic stress disorder. The symptoms built slowly over years, ultimately becoming so pronounced that a few months ago Mains had to leave the job that he loved.

He’s now getting treatment while seeking worker’s compensation and a disability pension, but success is no sure thing: Unlike other states, Illinois does not treat PTSD as a “presumptive” condition, meaning firefighters must prove that their suffering is indeed the result of their work.
read it here
Posted by Kathie Costos at 9:47 AM