This Kentucky legislator wants to create a Women Veterans Day

The bill's language boasts, "women have proudly served their country throughout all periods of the history of the United States, whether disguised as male soldiers during the American 4 Revolution and Civil War, as nurses in World War I, or as combat helicopter pilots in 5 Afghanistan." 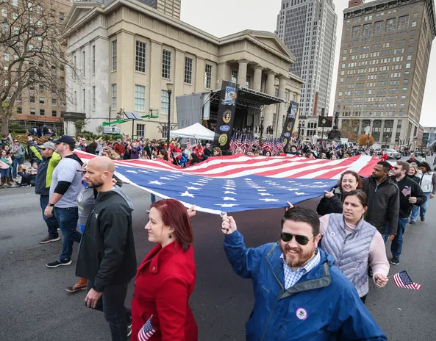 A Kentucky legislator wants to set aside a date for Women Veterans Day, and she has a lot of support from her colleagues.

Patti Minter, D-Bowling Green, introduced a bill Tuesday into the Kentucky Legislature that asks for June 12 to be set aside to honor women in Kentucky who've served in the military.

And more than 70 Legislators have signed on as co-sponsors.

Minter told The Courier Journal she's been "overwhelmed and excited" about the support from her colleagues, which has transcended political party and gender.

Minter, who is not a veteran, said setting aside a day for female veterans would be both "celebratory and educational."

When she was first sworn into the General Assembly, Minter was assigned to a committee that worked with veterans. Through that work, she said she was "educated" by women veterans about the "unique challenges" faced by service women.
read it here
Posted by Kathie Costos at 9:20 AM