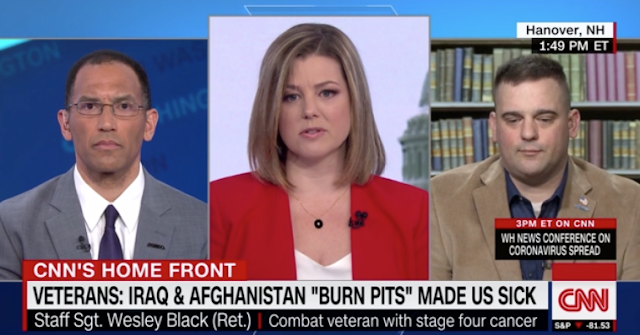 
Washington (CNN) "I'm not bullshitting you when I say the conversation went like this: 'Hi Wesley, I just wanted to call and see how you're doing. Are you alone this weekend?'" retired Staff Sergeant Wesley Black said, describing the call he received three years ago from his doctor.

"'Great,OK good, because we wanted to let you know you have stage four colon cancer, and we'll be in touch with you Monday, OK? Have a good weekend.'"

Black was 31 years old and had recently begun a new career as a firefighter. His wife had just given birth to their baby boy. Days before, they had signed the mortgage on their first home.

The colon cancer had spread to his liver and lungs and Black says doctors gave him three to five years to live. That was three years and one month ago.

Later, he learned burn pits used by the military to destroy trash in Iraq and Afghanistan, where Black had served in the Vermont National Guard, were to blame.
read it here
Posted by Kathie Costos at 9:15 AM