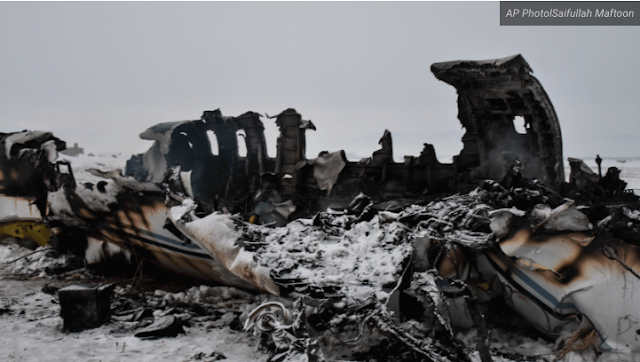 A wreckage of a U.S. military aircraft that crashed in Ghazni province, Afghanistan, is seen Monday, Jan. 27, 2020.


A New Hampshire man was one of two airmen killed when an Air Force plane crashed in Afghanistan, the Department of Defense has confirmed.

U.S. forces recovered the service members' remains Tuesday from the site of a plane crash in Afghanistan the day before. Wednesday, the deceased were identified as 30-year-old Capt. Ryan S. Phaneuf of Hudson, New Hampshire, and 46-year-old Lt. Col. Paul K. Voss of Yigo, Guam.

Phaneuf was assigned to the 37th Bomb Squadron at Ellsworth Air Force Base in South Dakota. Voss was assigned to Headquarters Air Combat Command at Joint Base Langley-Eustis in Virginia. Both men were on board the U.S. Bombardier E-11A aircraft that went down Monday in Ghazni Province.
read it here
Posted by Kathie Costos at 7:39 PM