If you want to help the Jar Heads

Right now, everyone wants to help the Jarheads after the terrible tragedy that claimed the lives of 7 of their group.

Right now they need all the support they can get, but it is more important they receive the right kind of help.

While the shock is still fresh for them, many will experience a harder time after the funerals. Some may think it is their job to stay strong for the others, and that is OK, as long as they allow themselves time to grieve.

Let them honor what they are feeling so they can begin healing.

If they are angry do not try to shut it down. Help them yell at the air, hit pillows, stomp their feet...let them release it.

If they want to cry, let them. Hold their hand, walk beside them or sit near them. Let them know you are there for whatever they need. Do not try to stop their tears. They will stop crying when they get out as much pain as they need to.

If they want to talk, listen to them. Do not try to fix them. They do not need to be "fixed" and you finding something to say is not what they need from you. They need your ear, your time and patience.

If you think about what you would want from them if you were in their place, that will help you know what to do...as much as you will know what to not do, or get as close as you can.

There is no time limit to grieving other than as long as it takes them to do it. No two people are the same.

If you are a survivor, know that the guilt you may feel is "normal" but whatever you think you may have been able to do, it was not like the movie you can play out in your own mind. Most of the time, what you think you should have done, or could have done, is usually impossible.

Do not blame yourself any more than you blame God. He did not do this, but He did send people to help comfort you as much as they can. Lean on those who care about you so you can heal. After all, you'd probably do the same for them.

Within 30 days, if you address what you are going through, your pain should ease up. Flashbacks and nightmares should begin to lose power.

While the pain may be there for a long time, as long as it is not as strong, keep working on it.

If your pain is stronger after 30 days, contact a mental health professional so that you can work on healing with their help.

Know that if you are hit by PTSD, it hit you because your emotional core is strong. As you feel good stuff stronger, you feel pain on a deeper level. As a survivor use that strength to help you heal.

Honor your feelings so you can begin healing! Trying to "get over it" or "stuff it" lets that pain spread out like an infection.

The head of a motorcycle club that lost seven people in a horrific New Hampshire crash last week said Wednesday that the abrupt resignation of the Massachusetts RMV boss is a “ridiculous” response to the tragedy, allegedly caused by a West Springfield man who kept his commercial driver’s license after an impaired driving arrest last month in Connecticut.

“It’s ridiculous for someone to be allowed to resign, or forced to resign . . . [and] run away from the problem,” said Manny Ribeiro, president of Jarheads MC, which lost seven riders who were killed June 21 when a truck driven by Volodymyr Zhukovskyy, 23, allegedly plowed into them in Randolph, N.H.
read more here 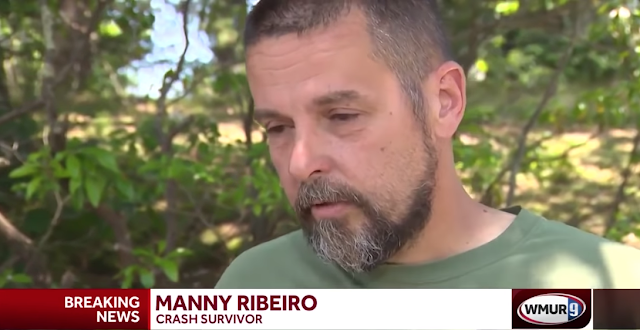 A Marine who survived the deadly New Hampshire crash that killed seven motorcyclists says what he witnessed that day was worse than anything he saw in combat.

Manny Ribeiro and his wife, Valerie, were riding in the front of the group of motorcyclists with Jarheads MC, a New England-based club for Marine veterans and their spouses, when an oncoming pickup truck hauling a trailer collided with other bikers in the group on Friday evening in Randolph, New Hampshire.

“It was like nothing I’d ever seen — never in my life,” he told reporters on Monday, according to CBS Boston.

The driver of the pickup, 23-year-old Volodymyr Zhukovskyy, of West Springfield, Massachusetts, was arrested and charged Monday with seven counts of negligent homicide. Authorities have not revealed details about the potential cause of the crash, only that Zhukovskyy was traveling west on U.S. 2 while the bikers were headed east at the time.

Ribeiro, who is now serving as president of Jarheads MC, told the Associated Press that the 21 riders in the group of 15 motorcycles had just finished dinner and were on their way to a fundraiser at a nearby American Legion post.

The motorcyclist had been riding beside the club’s president, Albert Mazza Jr., 59, of Lee, New Hampshire, at the time of the crash.

“It was just an explosion … with parts and Al and everything flying through the air,” he said. “He turned hard left into us and took out pretty much everyone behind me. The truck and trailer stayed attached and that is why it was so devastating … because the trailer was attached and it was such a big trailer, it was like a whip. It just cleaned us out.”
read more here

To contact the JarHeads go here
Posted by Kathie Costos at 6:07 PM